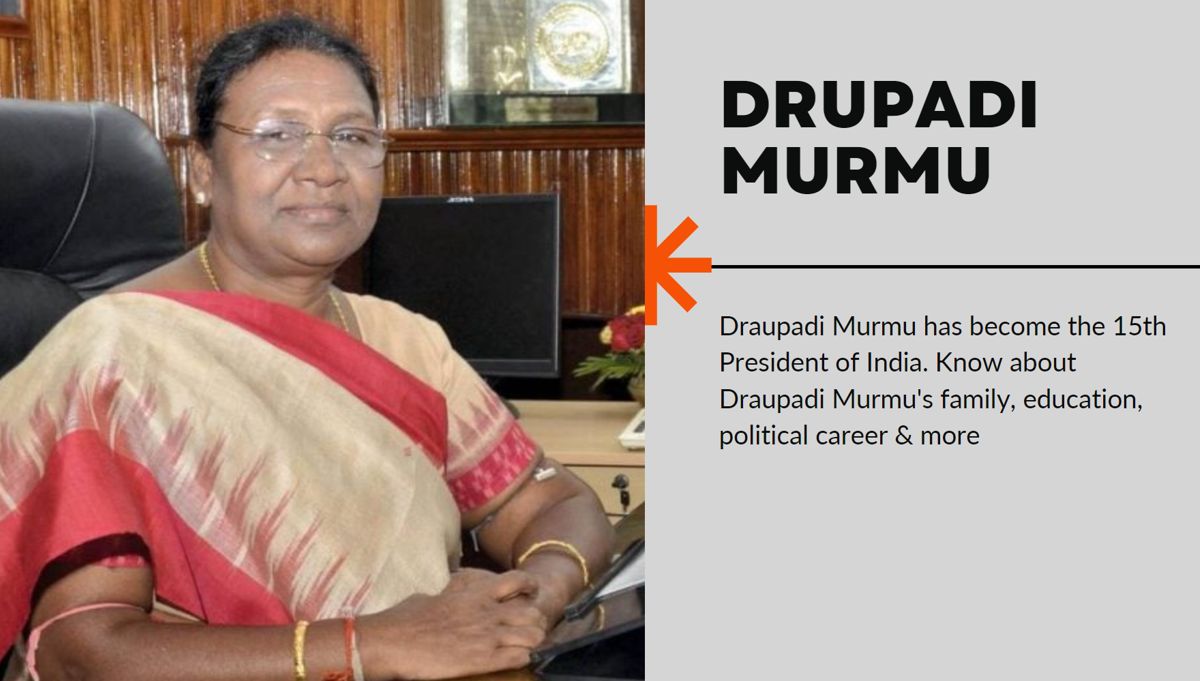 Draupadi Murmu is a member of the Bhartiya Janta Party and has become the 15th President of India. She won the top constitutional job from an opponent nominee Yashwant Sinha. Up to that time, she is a tribal leader from Odisha who made her way to politics with her soft-spoken leadership and utter hard work. After winning the 2022 presidential contest Draupadi Murmu has become the second woman and the first tribal woman to hold the uppermost post in the Indian constitution. She has also served as the first woman Governor of Jharkhand and took oath for this position on 18th May 2015. It was the time when Naveen Patnaik was leading the BJD-BJP coalition government. Find here Draupadi Murmu Biography.

Draupadi Murmu has born on 20th June 1958 in a remote village Mayubhanj, Uparbeda, of Distt Odisha India. She is 5 feet and 4 inches in height and has a dark complexion with black eyes and hair. She is now 64 years of age when she won the presidentship of India. She did her schooling in K.B.HS Uparbeda School, Mayurbhanj. She completed her education with a degree in Bachelor of Arts in Ramdevi women’s University Bhubaneswar. She is Hindu by religion and she likes to pursue her hobbies of knitting and reading books.

She is a very humble lady from a simple and middle-class family background. Her father’s name was Biranchi Narayan Tudu who was a farmer by profession. She had two siblings and both were brothers named Bhagat Tudu and Sarani Tudu. A little bit of politics was in her genes. Her grandfather and father both were the village heads of Mayubhanj under the Panchayat raj system. Her husband’s name is Shyam Charan Murmu who was a baker by profession has passed away in 2014. She has also lost her two grown-up sons. Now she had left with the only family member that is her daughter Itishri Murmu. Her daughter is married to Ganesh Hembram who is a rugby player and Itishri is working in a bank.

Her workings before politics!!

Previously, in 1979, after completing her graduation she had worked as a junior assistant in the Irrigation Department of the Odisha government. After that in 1994, she started working as an assistant teacher in an Aurobindo Integral education center in Rairangpur, Odisha.

She started her political profession in 1997 with BJP and worked as a councillor in Rairangpur. After that, she become the chairperson of Nagar Panchayat and also served as the national vice-president of the scheduled tribes’ morcha of Bhartiya Janta Party. She handled the state ministry of commerce and transport department from 6th March 2000 to 6th August 2000. She remained state minister of Fisheries and animal from 6th August 2002 to 16th May 2004. Moreover, she also handled the post of a former cabinet minister of the legislative assembly of Odisha during 2002-2004.

Although Draupadi Murmu has struggled a lot in her personal as well as political life, it is also revealed that she was having her own house till 2009. Still, after facing so many tragedies in life she touched the summit in the life of the Indian public. She has attained immense records in politics and also in social services.

In June 2022, she was selected as the national independent alliance’s applicant for the President of India for the 2022 election by BJP. For attaining this position Draupadi Murmu has visited different states of India for seeking support from BJP policymakers and also from other opposition parties. . This visit was a part of the presidential campaign 2022 for her candidature as an Indian president.

Under this campaign, Draupadi Murmu visited Shiv Sena of Maharashtra, BSP of UP, states of NE, BJD of Odisha, JMM Party of Jharkhandwon and JDS of Karnataka. Including this many other parties from some of the prominent opposition parties extended their hold up to her.

Honours and awards of Draupadi Murmu!!!

She is a humble lady and she got so much honoured in all the fields she worked in her career. In the year 2007, Draupadi Murmu acknowledged the Nilkantha award for being the best member of the legislative assembly in the Odisha assembly.

Is a Free Bank Account for Students Worth It?